Greg McArthur’s Snowman was premiered in 2003, but it has been back on stage several times ever since. The latest return of Snowman is currently taking place at the Revue Stage on Granville Island, where it will be delighting the audience from November 4th and until November 19th.

Snowman’s continuous success is due, in part, to its timeless story. The play takes us to a remote region in northern Alberta, where a stereotypical mountain man named Denver (Derek Metz) has lived for some time now along with his psychologically-troubled life partner, Marjorie (Kathleen Duborg). Denver and Marjorie lead a quite isolated and monotonous life. They make a living by renting out pornographic movies to other residents of the village. One of their most loyal customers is a young drug addict man named Jude (Charlie Gallant), a native from the village who was abandoned by his parents when he was just a child. Jude becomes an avid consumer of Denver’s collection of gay German pornography.

The life of the three characters takes an unexpected step away of dullness a day when Jude, while taking one of his usual walks in the freezing forest, finds the dead body of a boy lying underneath a sheet of thick ice – and develops a strange fascination for the dead boy. He shares the news about his discovery with Denver, who decided to contact the authorities to have someone come to examine the body. The government in Edmonton sends up north a rookie archaeologist named Kim (Anna Cummer) to follow up with Denver and to investigate the body. Kim and Denver seem friendly to each other, which is not welcome by either Marjorie nor Jude. Kim’s arrival to the village brings a series of emotional and behavioural twists to all characters, to own in their particular way – including Kim’s own, to create a hilarious mix of events that build up a great momentum to welcome an interesting end of the story.

The tone of the play is quite humorous, at some points frankly hilarious. To help create the different ambiences necessary to perform the show, the play relies in simple but effective lighting effects, as well as background music and sound effects created with the help of a guitar and a bass guitar. A very use of props and scenery help to avoid the need to change scenarios constantly, which helps to keep a smooth continuity of the show.

Snowman runs for under 2 hours, including one intermission.  However, the time seems to run much, much faster – it is a play that definitely does a great job to keep the audience well entertained and engaged in the story. The play is without a doubt a great example of modern Canadian theatre, which helps to explain its ongoing international success throughout the years. 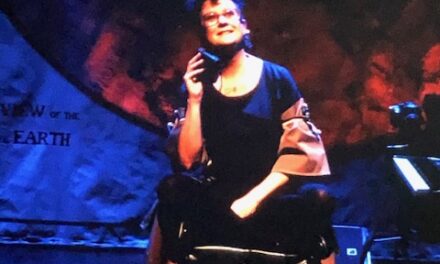