On January 25, top chefs from 24 countries around the world will convene in Lyon, France to compete in the most demanding culinary competition in the world: The Bocuse d’Or. Canada’s representative at this prestigious competition is BC’s own Chef Ryan Stone. On January 5 I had the opportunity to see his final practice run-throughs before representing his country on the international stage.

This run-though was a great change to see all of the elements of the grueling competition, using the same allotment of time and resources, exact ingredients, and precise preparation techniques. After five hours of intense culinary pressure and concentration, Chef Stone unveiled his incredible masterpiece that will hopefully bring home the gold for Team Canada. At the competition each chef is allotted five and a half hours to prepare on seafood and one meat dish. Each plate must be presented with three different garnishes and contain a total of twelve servings. The live audience will be made up of 3000+ cheering fans, 1000+ journalists and streaming live to over 70 countries around the world. Each competing chef must have one the competition in their own country before they can enter the world competition, each country sends their winning chef, one apprentice that is under 22 years of age and one judge. For 2011 there are 24 chefs competing for the world championship including: Argentina, Australia, Belgium, Canada, China, Denmark, Finland, France, Germany, Guatemala, Iceland, Indonesia, Italy, Japan, Malaysia, Netherlands, Norway, Poland, Spain, Sweden, Switzerland, United Kingdom, United States of America, and Uruguay. Chef Ryan Stone is the Executive Chef at the Westcoast Fishing Club on British Columbia’s Haida Gwaii, previously he apprenticed with Chef Scott Jaeger at the Pear Tree Restaurant in Burnaby.

Cheering for Chef Ryan Stone as he is representing my country Canada. More information on The Bocuse d’Or 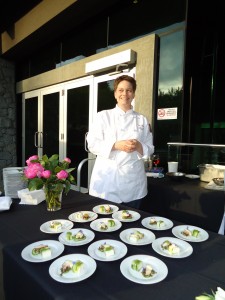