Join the Fillmore Family and Linda Fillmore for this 90 minute proof positive, reflective, respectful, passionate, loving, and uproariously funny look back by Leslie Jordan at how his Southern Belle Mom, Miss Peggy Sue, an indomitable, inspiring steel magnolia survived Leslie’s tales of woe, regret, success and rewards. Leslie Jordan has proven to be a lot of things in his illustrious career spanning TV-FILM-STAGE and NIGHTCLUBS.

The common thread of his fame, whether he’s playing a role or just being himself is; he sure can tell a story! Regaling audiences and critics alike with this latest in a series of acclaimed autobiographical stage pieces, the Pixie from Dixie turns to his mother for source material that will entice you to sit back and lend an ear. Best known for his raucous, outrageous recurring role as Karen Walker’s nemesis, BEVERLEY LESLIE on the television classic Will & Grace (garnering an Emmy for Best Guest Actor in a Comedy Series, 2006).

The self-proclaimed “gayest man I know” has publicly chronicled his start in show biz from the day he boarded a Greyhound bus bound for Hollywood with $1,200 sewn into his underpants to the heights of his lucrative, diverse and award-winning career as a comedic actor. Success has not been without its dangerous temptations along the way; a self-proclaimed former battle with various addictions, self-loathing and even a brief incarceration, candidly and openly shared. But Jordan shifts and shares the focus in “FRUIT FLY”. In doing so, he asks the age old question to jump start the proceedings, “Do Gay men Really Become Their Mothers”??? This show-and-tell tribute will you enthralled by the gamut of emotions served up by the no-holds-barred performer. 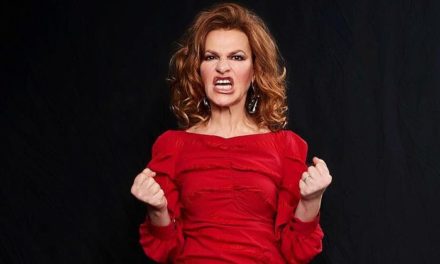