This is the first event in this Food Talks series! Come and join to meet and mingle with other foodies, and to hear some enlightening speakers from the food community. Trevor Bird is 28 years old and is opening his new restaurant Fable Kitchen in Kitsilano in early May, he also runs his own catering business, Trevor Bird Cooking. He has also been featured this season on Top Chef Canada and is still in the running for Top Chef. Prior to this, he was the chef de partie at the Shangri-La hotel in Vancouver. He also worked as a chef at Truffert and as a sous chef at Restaurant Garcon, both in Montreal, where he is originally from. Trevor has a degree in culinary management from Algonquin College in Ottawa. A restless spirit, Trevor has spent equal parts of his career on the east and west coasts of Canada. His constant searching even led to a stint in Peru to cook for an NGO. He’s hoping Top Chef Canada will provide his next big challenge. Visit Trevor’s web site for tips, recipes and more.

Stephanie Yuen was born in Hong Kong and has lived in Vancouver for more than thirty years. She is the Author of the Douglas & McIntyre published “East Meets West” Cookbook (released May 2012). The first book of its kind, East Meets West is a celebration of the city’s Asian food and a mouthwatering compilation of distinctive dishes from its most talented—but often unheralded—kitchens. She speaks Mandarin, Cantonese and English and worked as a journalist for Sing Tao, the Vancouver Chinese newspaper, before developing a career as a freelance food journalist. She was a food columnist for CBC Radio 1, and she now writes for Edible Canada and What’s On magazine, contributes to the Vancouver Sun and appears frequently on radio and TV. Follow her blog about Asian food:beyondchopsticks.com. Stephanie also co-founded the Vancouver Chinese Restaurant Awards. Mike McDermid is the Ocean Wise Manager at the Vancouver Aquarium,  a conservation program created to educate and empower consumers about issues surrounding sustainable seafood. Ocean Wise  works directly with restaurants and markets to help them make ocean-friendly buying decisions based on the most current scientific information, and provides an easily recognizable eco-logo to mark these products. Through work with partner businesses, the seafood industry, and government, Ocean Wise is helping to create a market for sustainable seafood in Canada. Mike’s background includes 10 years of research, education and program development experience focused on marine and aquatic environments in British Columbia. He has conducted fisheries related research with the University of British Columbia, the Department of Fisheries and Oceans Canada, Environment Canada, the British Columbia Ministry of Environment, and the Vancouver Aquarium. Hunter J. Moyes climbed the culinary ladder from an early age, and has been called “Chef” for a few years now. Currently, one of the Chefs and event organizers behind East Vancouver’s Waldorf Hotel, he leads a double life with environmental and political NGO’s on the side. With over 10,000 hours cooking under his belt across Canada, and years of events with NGO’s, Hunter is fit to talk food – with a hint of politics, a dash of environmental issues, and a pinch of local agri-news. Salt to taste.

Outside of The Waldorf Hotel, Hunter is about to launch a Non-profit Organization called The Tiffin Project, with a group of restaurants in Vancouver, who’d like to see if they can try to phase out TO GO packaging in their businesses while raising money to subsidize their purchasing of local ingredients at the same time. The project – which he’ll explain – hopes to become a revenue engine for the re-localization of the consumption power of Vancouver’s restaurant community. Roberta LaQuaglia is the Operations Manager for Vancouver Farmers Markets (VFM), a non-profit society that brings locally produced food to urban consumers through the creation of pop-up plazas of commerce across the city. Roberta works collaboratively with vendors, staff, volunteers, community members and site hosts to meet the needs of all market stakeholders.  She also totes tents, hoists tables & patrols parking as one of the market crew whenever needed.

When she isn’t organizing farmers markets, Roberta can be found baking goodies for her family and preserving her market bounty for trading at monthly “Food Swap Burnaby” events, that she also organizes. Roberta is a graduate of Langara’s Display and Design program and comes by her love of food and the domestic arts honestly, from her mom.

The Evening: Enjoy tasty appetizers from W2 Media Cafe followed a wonderful line-up of speakers who will talk about themselves and their passion related to the food community.  There will be a Q & A where you will have a chance to ask questions and engage with the speakers. Each guest will receive a ticket for a glass of red or white wine, there will also be a draw for prizes and to finish off the evening you will take home a sweet Treat from one of Vancouver’s bakeries.

Growing Chefs is our designated charity,  support their wonderful organization that educates children on the food community in the public schools.

Tickets: $30 per person (eventbrite fee extra); $75 for 3 pak of tickets (get a group of your friends together and save by purchasing a 3 pak (eventbrite fee extra) before June 1st. * $40 per person after June 1st.– ticket price includes appetizers and a glass of wine, along with a sweet treat in addition to hearing from some great speakers, a Q & A follows.  A donation of $3 from each ticket purchased will go to support Growing Chefs.

Note: Limited tickets available. All ticket sales are final. No exchanges or refunds; however they are transferrable with printed proof of ticket. ALL Tickets must be purchased in advance online. Event produced by CMI Chat Media Inc 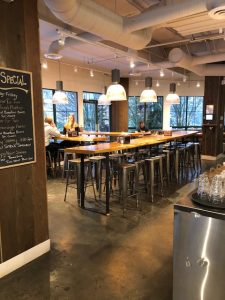 Foodie Visit to Whistler during Cornucopia