The Vancouver-based band The Fugitives is of a special breed: It is the combination of talents of 4 young musicians (Adrian Glynn, Barbara Adler, Brendan McLeod, and Steve Charles), who, for the most part, started their careers as poets and writers. Eventually, they found their way into the music scene and developed successful solo careers, which would later get them to join musical forces as the Fugitives. Nevertheless, all of them keep alive and burgeoning their solo careers on the side.

Taste and Sip Magazine spoke to The Fugitives and found out more details about their career and views of their work.

ET: What can you tell us about your drive into music?

Barbara Adler: When I started with the group I was mainly a writer and doing poetry and some music, but over the years of playing with the group together I’ve gotten more into playing music, I play accordion in the group. The Fugitives is a way for all of the members who have solo careers to put together their music and have it played by us and figure creative things. So it’s like the home for three or four solo acts to come together and cooperate.

ET: I heard that you guys were heavily involved in writing. What kind of writing did you do?

Adrian Glynn: I am a songwriter, Brendan McLeod is the novelist in our group and both Barbara and Brendan are poets.

ET: How was the transition from pure writing into music?

BA: I learned accordion and that was a very long and lonely time, with lots of frustrated roommates and people living next door to me. But I guess just learning an instrument and finding ways to make words more musical, so sometimes putting melodies to them or finding ways to make them rhyme through music. But I think there are a lot of similarities between poetry and lyric writing already so they go hand on hand.

ET:  What is the feeling you get when you realize the success you have reached musically both in your hometown of Vancouver and abroad?

BA: It’s really cool. When we started up 6 years ago we were playing in small poetry venues. Our first tour was in England and we were playing in poetry shows, where it was kind of a novelty that we were playing music. It was really cool at that time to start playing at bigger festivals and to be accepted as a musical act, playing at music festivals. At least at the beginning there was a little bit of resistance to the idea of having people talking over music at a music festival, so it has been really cool to grow that following crew that allow us to do that. Also to see how folk music has changed, allowing more diversity in the kind of acts that come.

AG: I think what makes our style unique is the fact that we all come from very different inspirational backgrounds. We like a lot Bruce Springsteen, and between us all we like everything, bunch of different types of jazz and different types of songwriters, pop, rock, a lot of 80’s as well. But we are all our own type of writer. We don’t tend to get together in a room create a song usually; what we usually do is that someone writes the bulk of a song, maybe 70% of it, and then they bring it to the table and then we all try to finish it off. So that’s why we get so many different styles in our group.

ET: Do you guys have any upcoming projects, either musically or in literature?

AG: The summer is a busy time for us as a group, so we are gonna break off a bit and focus on solo stuff. I know for me I have a solo record coming up this fall. What do you have coming up, Barbara?

BA: I was commissioned to create a speech with my band’s sayings for the Gabriola Poetry Festival, so I have to write a 20 minute speech accompanied by accordion music for that festival.

ET: Do you all guys have your solo projects? Can you talk a bit about them?

Brendan McLeod: I have a jazz background. I have my own project called Braveheart, which is like a saxophone trio that plays a wide variety of music as well as jazz music. But I’ve always played with a lot of songwriters and I’ve always really found a social place for that music. So I have been a bit in and out of this world and in a few different worlds as well. I’ve been around doing the basics.

ET: But the split you mentioned is just a temporary thing, right? You guys will eventually to come back together?

AG: Yes, we just take breaks  and do solo stuff, and then come back and work on the band. We just juggle with a few things.

ET: What would be the message that you would like to leave for anybody who listens to your music?

BA: Get together with people that you don’t think you have a lot in common with and then see what happens (laughs). 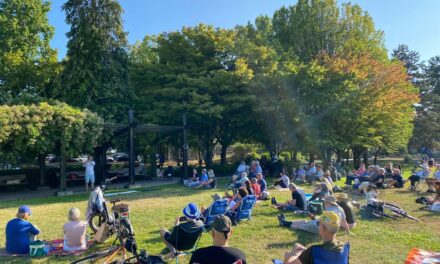